Zero, or 0, is a Numberblock who is made of no blocks. She is voiced by Teresa Gallagher, who also voices Six, Ten, Fifteen, Twenty-Five, Sixty, and Sixty-Four.

Zero has a black numberling 0 on top of her foxy pinkish red mouth. Due to being number zero, Zero lacks any blocks, arms, legs, and eyes.

Episodes in bold indicate that she plays a major role in that episode.

1 and 0 in the Bitblocks April Fools joke

"Merry Christmas, one and all!" 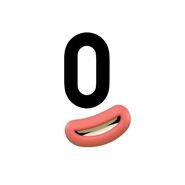