Unknown
Zap is an episode of Series 2.

Y sees Z sleeping. P pops in. A drops in between Z and P.

Z zaps away his letters. Z calls them back, but falls asleep again. Y has to get the letters back. K comes to help.

A, Y, and Z ride a yak in search for the missing letters. P pops back.

Y, A, and P yap loudly, but Y warns them not to yap because that wakes Z up. L sings him a lullaby. E yells out his sound with his loudhailer when is warned not to by Y.

"Yell, yell, yell, yellllll!" Z wakes up and falls off the spooked yak running away. He doubles up. Y tells ZZ what happened to the single Z. ZZ sends in J and A.

Jazz music plays, but it's no use. ZZ sends in D for marching music and G and I to form a word.

A zigzag is drawn out of z's! Z calls the letters for attention and falls asleep. Everyone laughs as the episode ends.

Z orders the Zs to come back

YELL! In your megaphone. And yelling the word yell...

Where are their pupils? 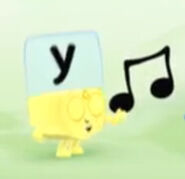 Retrieved from "https://numberblocks.fandom.com/wiki/Zap?oldid=177272"
Community content is available under CC-BY-SA unless otherwise noted.