Numberblocks Wiki
Register
Don't have an account?
Sign In
Advertisement
in: Unprotected, Episodes with songs, Alphablocks Episodes,
and 2 more

Unknown
Why is an episode of Alphablocks Series 1. In this episode, Y wants to become a vowel.

The vowels, A, E, I, O, and U, sing in harmony, until Y shows up. E says this group is vowels only. Shy Y sings about his desire to be a vowel.

Yes, I'm okay at the start
Of "yellow", "yo-yo", or "yacht"
But I'd like to be heard at the end of a word
And I'm trying to be something I'm not
WHYWHYWHYWHYWHYWHYWHYWHY!?

T and R appear to tell Y that all he has to do is tr... But they need a vowel. The five vowels show up.

It doesn't work. I and U refuse to help them, but Y can do it.

Y becomes striped like the vowels, much to their surprise.

The episode ends when Y sings harmonically with the vowels.

At first, we didn’t know what they mean. However, according to Mr. Yokai:

According to Mr. Yokai:

"Definition of tre corde. : with soft pedal released —used as a direction in piano music at the close of a passage una corda."

Also the word for "believe" in Swedish, Norwegian, and Danish.

What if Y comes at the end or middle of a word? 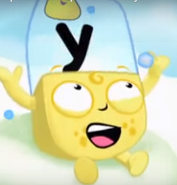 I refuses to help. 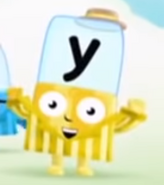 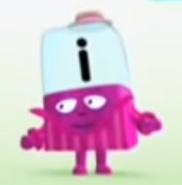