time to explain better, for each episodes I interviewed him on

I convinced him into watching it, he cringed from most of the parts.

I think this is why Battle said the opening was bad enough.

By using too much force Five just somehow knocks herself out of the train. Wait, shouldn't this train have doors?

The ones are dancing on the train, like they don't even care. What about REAL LIFE? 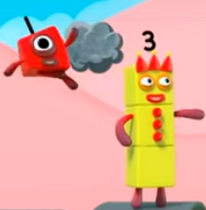 Three is smiling. One is also smiling. They like steam/smoke blowing them away, eh?

Their is enough space for Two to move sideways and stop the train. I guess Five doesn't care about...

Look, the Black is supposed to be where Three is looking at. SHE SHOULD BE PAYING ATTENTION! 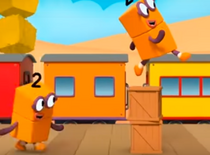 Wow, after bumping into crates the Twos now have sense about dodging the crates. WOW. 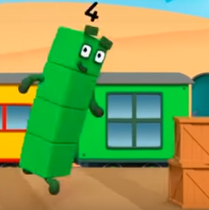 Four, stop staring at the screen.

Oh NOW he's paying attention. Only when they bump into crates will they suddenly see the crate.

Wait, is TWO SMILING ABOUT THE OTHER TWO?!

HOP! HOP! HOP ON TOP! THEN DANCE ON THE TRAIN AND MAKE IT FLOP! DON'T MAKE THE TRAIN STOP, 'CAUSE WE'RE TOO INTERESTED IN THE BOP!

Yes. Look where Four's body is pointing to. Again, Four only pays attention when he's about to make contact with it.

"4! look out! oh nevermind, too late. You crashed like a complete moron"

Yes, Three glues to the wall instead of simply falling off.

Well Three is running on the air. 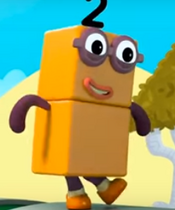 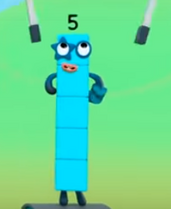 "You have saved [my life], [I am] eternally grateful." - Five when she's about to be CRANED. THIS IS NOT WHAT SHE ACTUALLY SAYS.

Please see the end for yourself while I bring up bonus noobs.

Add a photo to this gallery
Retrieved from "https://numberblocks.fandom.com/wiki/User_blog:MrYokaiAndWatch902/from_the_interview_with_battle:_reasons_why_he_hates_that_episode?oldid=25467"
Community content is available under CC-BY-SA unless otherwise noted.
Gaming: New Releases New in Entertainment Lifestyle: Travel