Eleven, or 11, is a Numberblock made of 11 blocks. She is voiced by Beth Chalmers.

She is the first of the teen numbers and is an avid football player.

Eleven is made of ten white blocks and one red block. Her eyes are red, with her right eye notably being twice the size of her left. She also has pale red lips and green limbs. She wears aqua striped shorts, along with white socks and dark green shoes.

Eleven has two colored-variants featured when Twenty-Two splits, reflecting his red and blue color palette. While one Eleven retains her red block and border-coloring, her clothes are reflected to match a similar bright red color. The second Eleven instead takes on a dark blue color.

Eleven is an upbeat, high-spirited Numberblock who takes great pride and passion in football. She often spends much of her time practicing and competing in football games. Despite prioritizing football as her main passion, Eleven is very inclusive of her friends, often inviting others to play with her. She is extroverted and friendly, frequently jumping in to invite her friends to play with her. Eleven also tends to be rather easygoing, often following the plans and routines of others while showing support and encouragement. 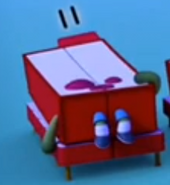