Numberblocks Wiki
Register
Don't have an account?
Sign In
Advertisement
in: Protected, One Fans, Userbox Template Pages,
and 30 more

I am an even number

I'm Slimes of Slime Rancher and I am a fan of Learningblocks!

12: She is amber with plum oval eyes with two pairs of eyelashes, lips, limbs, and chef's hat.

13: He is goldenrod with dark gold diagonal oval eyes, lips, limbs, and a plaster on his right cheek.

14: She is lime green with purple rectangle eyes with two pairs of eyelashes, lips, dark green limbs, and rainbow hair.

1.He is indigo in four different shades, with pink square eyes (4^2) and eyebrows and purple lips and limbs.

2. She is White and Indigo with SNES controller eyebrows and she like old games. She has dark indigo limbs and face with square eyes AND pupils.

17: She is lavender with purple eyes with three pairs of curved eyelashes, purple lips, and blue limbs.

18: She is flamingo pink with purple eyes with three pairs of eyelashes, a purple bow, purple lips, and magenta limbs.

19: She is silver with almond eyes with two pairs of eyelashes, and dark grey lips and limbs.

21: She is teal green with a brown golf hat and limbs, blue eyes with one pair of eyelashes and lime sclera, pink lips, and three yellow heptagon buttons (7x3).

23: She is midnight blue with long purple hair, a grey beanie, one pink eye and lips, a necklace with a grey star, and light cyan limbs.

24: He is magenta with lavender semicircular eyes and lips, a dark purple hat, a necklace with a dice, and twenty-four dark purple limbs.

26: She is light indigo with red eyes with one pair of eyelashes, a plaster on her nose, pink lips, and maroon limbs.

28: Similar to Two, but his features are dark teal, and he is salmon coloured. He wears a teal cap and scarf.

29: He is cream with dark cream eyes, lips, limbs, and rabbit ears, a pink triangular nose, and light cream tummy.

32: She is green with lime limbs, she has 32 limbs. Her mouth and eyes are chartreuse with three big lashes.

33: He is similar to 11 but lemon with three red bells on his top hat. He has red lips and yellow eyes. His limbs are yellow. His bow tie and top hat are dark yellow.

34: He is light salmon with brick limbs, mouth, eyes and eyebrows. He has a 4 pointed star between his eyes.

He has heart-shaped eyebrows.

35: She is a dark cyan with a cyan mouth and eyes. Her eyes are in the shape of a pentagon, she has 1 lash on either side. Her limbs are really dark cyan.

37: She is magenta with one purple pentagonal eye with an eyelash on each side. She has dark blue limbs and pink lips.

38: She is mint green with magenta limbs. She has almond-shaped purple eyes with two eyelashes on each eye, her lips are also purple.

39: He is dull yellow with dull blue limbs, lips and eyes. He has a plaster on his right cheek.

41: She is brown with one dark yellow triangle eye, straight eyelashes, lips, and limbs.

42: He is light blue with black rectangle glasses eyes, pink lips and limbs, and a brain symbol on his below-face block.

43: He is red with three blue eyes, lips and limbs.

45: She is pink with one purple star eye with two eyelashes, and purple lips and limbs.

46: She is light lime with long green hair, a grey beanie, one emerald eye and lips, a necklace with a grey heart, and dark red limbs.

47: He is lemon yellow with purple oval eyes, mouth and limbs.

49: She is rainbow like Seven (7^2). She has rainbow hair tied up in a ponytail that goes seven different ways. Her eyes and mouth are yellow. Her limbs are dark violet.

64: He is green with dark green infinity-shaped eyes with eight eyelashes, square eyebrows (8^2), and 64 limbs.

81: He is like Nine (9^2), only bigger and his middle block is reddish. He may sneeze it out to change into Eighty.

0.5: She is blush red with red limbs and one small eye.

1.5: He is fire with magenta limbs and one eye that has to prongs on the sides.

4.5: She is seafoam with parakeet limbs, she has 1 square eye and 1 star eye with 1 eyebrow.

5.5: She is azure with purple limbs, the same eyes as Five's but red and reversed, and pink lips.

6.5: He is rainbow-coloured with one of Six's eyes and one of Seven's eyes, both of which are yellow, and so are his lips, and also indigo limbs.

7.5: He is orchid with one of Seven's eyes and one of Eight's eyes, both of which are dark magenta, and so are his limbs, and wears a rainbow scarf.

8.5: He is grayish-magenta in three different shades with one of Eight's eyes and one of Nine's eyes, both of which are gray, and also dark purple limbs.

9.5: She is made of nine gray blocks with a dark gray border and one dark red half-block. She has one of Nine's eyes and one of Ten's eyes, both of which are red, and also pink lips and dark red limbs.

¼π (Quarter-Pi): She is light red, with red limbs and one round eye. She has 1 eyelash.

½π (Half-Pi): He is burnt orange with purple glasses and limbs. He has pink lips with a tooth.

¾π (3Quarter-Pi): She canary yellow with red 2 balls and 1/3 of a ball. She has yellow round eyes with eyelashes. Her lips are red with a tooth. Her limbs are magenta.

π (Pi): He is chartreuse with dark green limbs. He has dark green 3.14 eyebrows. His eyes are dark green and round, he has a dark green mouth with 2 teeth.

π¼ (Pi and quarter): She is lime green with one green circle eye with two eyelashes, one unevenly-symmetrical tetragram eye, pink lips, and green limbs.

π½ (Pau): She is mint green with 2 circular eyes with 2.36 eyebrows on each side. She has light mint 1 circle on her bottom Pi-Block and an oval on her top Half-Pi-Block. Her lips are pink. Her limbs are dark mint.

π¾ (Pi and 3quarters): He has all the colours of the previous Pi-Blocks and a light blue Quarter-Pi-Block. He has dark blue limbs. His face is yellow. He has rainbow coloured hair.

τ (Tau): He is purple with dark purple limbs and face. He has dark purple 6.28 eyebrows. He is basically πx2.

τ¼ (Tau and quarter): He is purple (3 shades) with blue limbs and face, he has oval eyes.

τ½ (Tro): She is magenta with purple limbs and face. She has 1 big horizontal oval eye with 2 eyelashes on each side.

τ¾ (Tau and 3quarters): He is pink with beet limbs and face. He has circular eyes.

ρ (Rho): She is a greyed out red (3 shades) with brick limbs and fac. She has 3 eyes, the bottom 2 have an eyelash and the top one does not.

√2: She is brick red with a prune face and limbs. She has one eye in the shape of a half square on its corner. She has 1.41 blocks.

√3: He is brick orange with a purple face and limbs. He has two eyes in the shape of a half rectangle on its corner. He has 1.73 blocks.

√π: She looks like One, who is made of one circle block.

√5: He is yellow-orange with dark yellow-orange eyes, dark pink lips and purple limbs. He has two eyes in the shape of two triangles. He has 2.24 blocks.

√6: He is honey-orange with dark magenta limbs, red lips, and one mustard parallelogram eye. He has 2.44 blocks.

√τ: He looks like Four, who is made of two circle blocks.

√7: She is dandelion with magenta limbs, red lips, and one triangle eye. She has 2.64 blocks.

√ρ: He looks like Nine, who is made of three circle blocks.

A/a: Same, with the same sound as the English short A, as in "ant".

Ą/ą: Same as A, but is emerald with no plaster and wears an emerald hat. Her sound is a nasal "a".

C/c: Same. Her sound is the dentalized laminal alveolar sound of "ts" as in "pits".

Ć/ć: Same as C, but his body and star colours switch. His sound is the voiceless alveolo-palatal sibilant affricate sound of "ch" as in "cheese".

E/e: Same, with the same sound as the English short E, as in "egg".

Ę/ę: Same as E, but is female and magenta and wears a magenta hat. Her sound is a nasal "e".

I/i: Same. Her sound is the English long E sound as in "pizza".

Ł/ł: Same as the English W, and the same sound as the said letter, as in "wet".

Ń/ń: Same as N, but with shaggy dark red hair and a white blaze on his nose. His sound is the alveolo-palatal sound of "ny" as in "onion".

Ó/ó: Same as O, but violet and wears a cap. His sound is the same as the English long U/OO, as in "boot".

Ś/ś: Same as S, but with reversed pale colours. Her sound is the voiceless alveolo-palatal sibilant fricative sound of "sh", as in "ship".

U/u: Same, with the same sound as the English long U/OO, as in "clue".

W/w: Same as the English V, and the same sound as the said letter, as in "van".

Y/y: Same, but in vowel form. His sound is the same as the English short I, as in "bit".

Ź/ź: Same as Z, but female and light green. Her sound is the voiced alveolo-palatal sibilant fricative sound of "zh" as in "vision".

Ż/ż: Same as Z, but emerald green with light brown facial hair, minus the beard. His sound is nearly the same as Ź's.

CH: Similar digraph as in the English Alphablocks. Its sound is the same as the Hebrew letter "chet".

CZ: Its sound is the voiceless retroflex sibilant affricate sound, as in "czas", meaning "time".

DZ: Its sound is the dentalized laminal alveolar sound, as in "dzwon", meaning "bell".

DŹ: Its sound is the voiced alveolo-palatal sibilant affricate sound, as in "dźwięk", meaning "sound".

DŻ: Its sound is the voiced retroflex sibilant affricate sound, as in "dżem", meaning "jam".

RZ: Its sound is nearly the same as Ż's.

SZ: Its sound is the voiceless retroflex sibilant fricative sound, as in "szum", meaning "rustle".

CI: Separate sound pair in English as in "city". In Polish, it makes the "ch" sound, as in "cheese".

NI: Separate sound pair in English as in "nip". In Polish, it makes the "ny" sound, as in "onion".

SI: Separate sound pair in English as in "sit". In Polish, it makes the "sh" sound, as in "ship".

ZI: Separate sound pair in English as in "zip". In Polish, it makes the "zh" sound, as in "vision".

DZI: The only known Polish trigraph. Its sound is similar to the Polish digraph DŹ.

Ξ/ξ (Xi): Same as the English X, but with reversed colours.

Υ/υ (Upsilon): Same as the English U but violet.

W/w: Unlike the other English Alphablocks, W is the only Swedishblock who looks different from its English counterpart. Although he looks the same as it, he has V's stripes and no water in his cap.

CH: Similar digraph as in the English Alphablocks.

KJ: English K sound before A, O, U, and Å, otherwise Ghanaian "sh".

NG: Similar digraph as in the English Alphablocks.

SJ: Its own Swedish-exclusive sound.

Polish Alphablocks (without faces and limbs)

Greek Alphablocks (without faces or limbs)

The Flying Fives in form

All Polish digraphs and trigraphs

All of the vowels (the word above means "vowels")

All the consonants (the word above means "consonants") 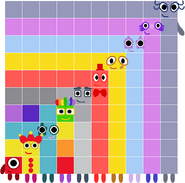 Most popular to least popular alphablocks in the Polish language

All the "Ten Blocks" and a "Hundred Block"

A lot of radicals

Look at all those PiBlocks 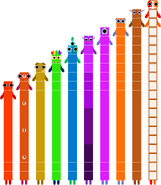 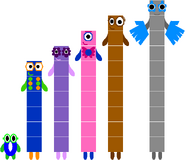 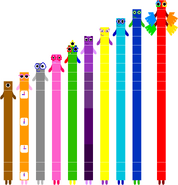 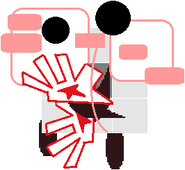 Parts of Ten for Punchcar

My NumberBlocks on their own 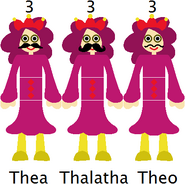