Up is the eighth Season 2 episode of Alphablocks.

U gets the balloon ride of his life, but he is still unhappy - or so he thinks! When unhappy U meets perky P, things can only go one way - up. Now U's only problem is getting back down.

U is unhappy. P wonders what happens to him, and they hold hands.

Everyone is lifted up by balloons! U is still unhappy. C comes to help.

A cup appears, with T inside it. P doubles herself up.

A puppy is lifted up as well, but U doesn’t want a pup and a cup and to be up. U wants to come back down. O flies by.

A flock of birds pop the balloons and the Alphablocks fall down. D, G, M, and S come to help U.

Everyone is lifted up by balloons again, with T inside a teapot.

This episode introduces the letter U and the words up, cup, pup, pop, sum, mug and mud. 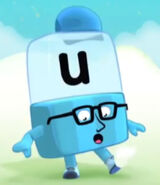 U! There’s white stuff on your shoe! 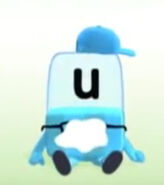 COME FLY WITH US! 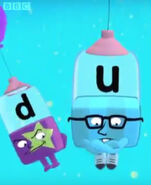 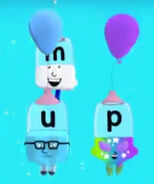 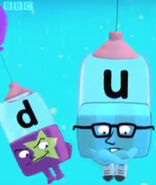 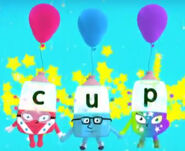 Why is P’s balloon red now? 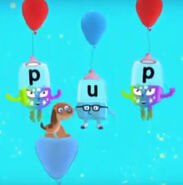 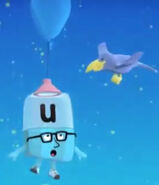 WE’RE SINGING AS WE’RE FALLING, WHILE SOME ARE CANNONBALLING! OUR LIVES BEGIN TO FLASH BEFORE OUR EYES! WE MIGHT AS WELL GO KABLOOEY, GET SMUSHED AND BECOME CHEWY, ‘CEPT THERE’S TONS WE WANNA DO BEFORE WE DIE!!!

Seven plus one is...

Come on. Even M knows that Who’s on First? trope. You guys would suck at Keep Talking and Nobody Explodes. 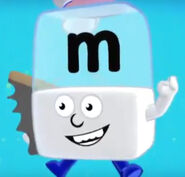 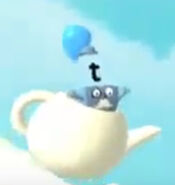 T’s in a teapot now.