Orange, with some very light orange and dark purple features for his eyes

About the size of One when contracted limbs, as tall as Two when standing.

The Two Times Table is a character in Numberblocks. He first appears in Two Times Shoe Shop and is voiced by Gregory Porter.

He is a bit similar to Two: an orange base with white top and a red circle in the middle. Two round eyes somewhat looking like Two's glasses (to make him a bit more like his Numberblock counterpart) and a mouth. He has four limbs similar to table legs, but he can retract them and become a rocket instead.

He likes twos, and things that come in twos. He has a hip personality, and works in a shoe shop.

"I'm the Two Times Table, and we both like to dance." 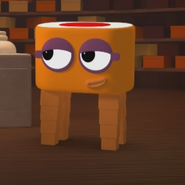