Twenty-One and On (compound)

Apricot, with orange borders, and yellow

Twenty-Three, or 23, is a Numberblock made up of 23 blocks. He is voiced by Marcel McCalla.

Twenty-Three is often happy being himself, and is reluctant to rearrange in his compound debut for this reason. He enjoys and does not mind not being able to make any rectangular arrays besides his prime positions, and is content with the fact that prime numbers like him are unable to do so. He also seems happy to be a prime number and kind of introduces the concept in Club Picnic.

I’m happy being me! 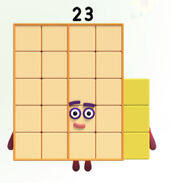 Twenty-Three in a different shape

Twenty-Three from the big screenshot