Reason: TOO. MUCH. VANDALISM

Apricot with Orange Borders and Purple

26 or Twenty-Six is a Numberblock made of 26 blocks.

Arifmetix's design of Twenty-Six is green with a dark blue grad-cap with light blue tassels and two trapezoid eyes on the sides of his head. He has letter magnets on his body, vowels are dark blue and consonants are swamp green. The letter Y is orange because it can be a vowel or a consonant.

TSRITW's design of 26 is gray with a black outline. He also wears a mortarboard cap. He teaches the Numberblocks about the alphabet from time to time, but at least one of them would complain that the show is not called Alphablocks and it would be impossible if the two shows have ever collided. Of course, that was wrong once Algeblocks came in. 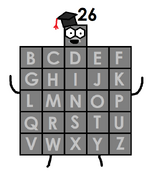 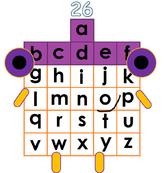 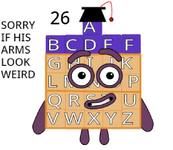 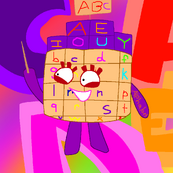 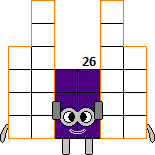 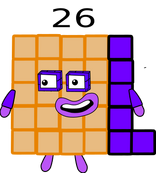 Punchcar's Twenty Six
Add a photo to this gallery

Retrieved from "https://numberblocks.fandom.com/wiki/Twenty-Six?oldid=127915"
Community content is available under CC-BY-SA unless otherwise noted.