27 has 20 apricot blocks with orange borders and 7 blocks falling in the color of a rainbow. She has purple eyes and limbs with pink mouth.

When in a cube arrangement, the red block is usually at the top, the orange is at the left side, the yellow is at the front, the green is at the back, the blue/cyan is at the right, the indigo is at the bottom, and the violet block is at the center.

Starting with Now in 3D, after having been thrown onto the Dimension-ator's controls by Octonaughty, Twenty-Seven now wears a purple mask with a yellow cube symbol above to symbolize she's a cube number. When she's not in a cube shape, she doesn't always have her mask on. 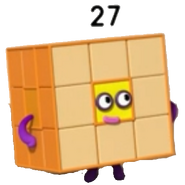 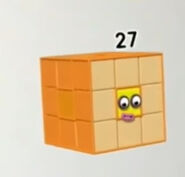 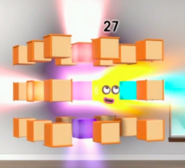 Seperated 27, showing the placement of each of her twenty-seven blocks. 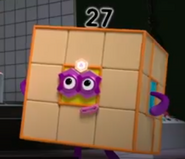 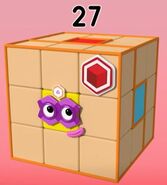 27 with the Cube Club badge.

27 in the group shot