???
Twenty-One and On is an episode of Season 6 of Numberblocks.

Twenty and chums find out what happens if you go past bus stop 20.

When the episode was uploaded onto YouTube by "Autism Belton", "Arifmetix" and a few other people, many fans began to spam comments relating to a very popular Numberblocks Youtuber, J W, who uses a blue One (formerly J) as his avatar. This is because the episode had one scene where Twenty-Two splits into a red and blue pair of Elevens, who split into 11 blue and 11 red ones. The blue ones bare a striking resemblance to J W's character, which is the reason behind the overflow. 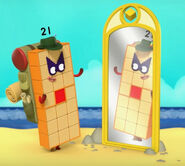 The return of the Magic Mirror!

To infinity... and beyond! ...get it?
Numberblocks episodes
Community content is available under CC-BY-SA unless otherwise noted.
Advertisement