The Big One (Compound)

Twenty-Nine has 20 apricot blocks with orange borders, and 9 blocks in 3 different shades of grey. He has a pink mouth and grey eyebrows and eyes, he has bluish grey arms that transitions into a light grey colour. He also wears five club badges.

Twenty-Nine enjoys creating new clubs for other Numberblocks to join; he even designs a membership badge for each club.

Twenty-Nine as a pattern print 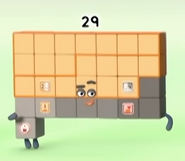 "I'm only just getting started!"