We're Going On a Square Hunt

Apricot, with orange borders and green

24 or Twenty-Four is a Numberblock made of 24 blocks.

Arifmetix's design of Twenty-Four is 2 shades of green (12x2) with pentagon eyes on the sides of his head and 8 clocks on his body (8x3). He has mint-green lips and limbs.

TSRITW's design is an adventurer. He once got eaten by Big Tum, but then he escaped.

TSRITW's alternate design is a clock maker and time teller. When he is first discovered, he takes off his array display and drops it in favor of a pocket watch.

PBS66Wikia's design is green with an orange border, square eyebrows, and he is 4x6.

Stikbot1992's design is green, white and orange, whose green blocks are in a square and has clock designs on them, and he has the power to time travel, and is known as a time lord.

AHT's design is white, orange and green. He has two orange ten blocks (not seen in the photo), with a square four block in the middle, like 12. He is 12's brother.

Imnotreal2007's design looks like 12 but 20 orange outlined blocks and 4 green blocks on the inside. their face kind of looks like 12 to, because 24 is 12's sister

Jamil's design of 24 has 20 apricot colored blocks and 4 more green blocks. His hand has a array display which means he is a super rectangle. His head has 2 clocks.

Davidmama1's figured-out design of Twenty-Four is a big Super-Rectangle who loves taking care of the rectangles (especially Eighteen) but she does not want anybody goofing out. 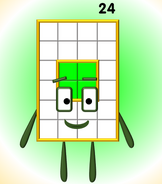 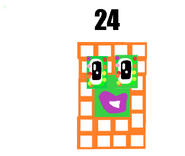 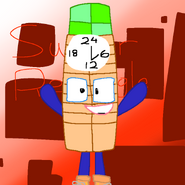 MDZ's Twenty-Four (based on Twenty-One) 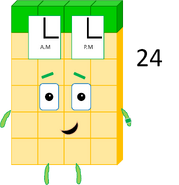 Numberblocks 24
Add a photo to this gallery

Retrieved from "https://numberblocks.fandom.com/wiki/Twenty-Four?oldid=174749"
Community content is available under CC-BY-SA unless otherwise noted.