Reason: Don't replace the image, it must show 24 in her main (3x8) arrangement.

Apricot, with orange borders and green

Twenty-Four, or 24, is a Numberblock made up of 24 blocks. She is voiced by Emma Tate.

The first revealed image of 24.

Twenty-Four zooming past T and Eight

24 in the group shot 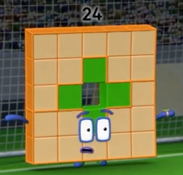 Twenty-Four as a square with a small hole