We're Going on a Square Hunt

Twenty-Five, or 25, is a Numberblock made up of 25 blocks. She is voiced by Teresa Gallagher.

Twenty-Five is friendly has a liking for squares, and patterns. She typically comes off as laid-back, but is shown to be competitive and even cunning when the situation calls for it. She is simply described as "a big square" by the official Numberblocks Twitter, and even called that by the Five Times Table. 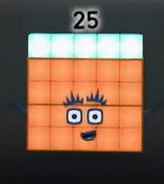 25 with her blue blocks on top

25 with her blue blocks on the side

25 as an isosceles triangle

25 in the group shot
Numberblocks characters
Community content is available under CC-BY-SA unless otherwise noted.
Advertisement