This page is about the character(s). For the episode, see Twelve (episode).

12 has 10 white blocks and 2 orange blocks. She has also thin eyebrows, rectangular eyes, red limbs like 10, and has a pink thing on her wrist called her "array display" on her left hand, which looks like a rectangular watch. She is often arranged in a rectangle, which is her favorite shape. 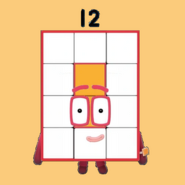 “Twelve with Rays” by Straightforwardking

Tvn owo’s 12
Add a photo to this gallery

Retrieved from "https://numberblocks.fandom.com/wiki/Twelve_(character)?oldid=174444"
Community content is available under CC-BY-SA unless otherwise noted.