The Big One (Compound)
Figure It Out (Figured-out)

Not much is known about him, other than the fact that he loves calendars.

Thirty-One has red eyebrows, red eyes, a red mouth, and red limbs. Something special is that he has calendar hooks to make him look like a calendar.

Thirty-One in his "Three Tens and One" shape. Note that his calendar hooks are missing. 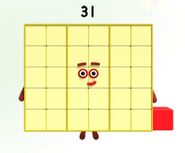 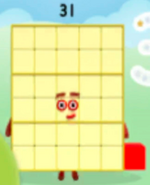 Yet another bald Thirty-One.