Reason: too much vandalism

This page is about the episode. For the character(s), see Thirteen (character).

This episode contains a song and its page has its lyrics. If you know how it goes, you can sing along in a new thing!

Thirteen is an episode of Numberblocks.

Unlucky Thirteen falls apart whenever anyone mentions his name.

Ten is eating a banana and a glass of water, when Three appears from behind a tree and surprises her, dropping her snack. Three wants to show Ten a new trick, but whenever she tries, one of her ball buttons fall off. She tries again, but slips on the ball. Ten backs away, but slips on a banana skin. They both crash into each other...

While he sings, many unfortunate events happen, and at the end, a giant piano falls on him as a big finish. 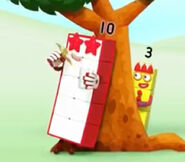 Ten eating, while Three plans to startle her

A chicken able to split Thirteen into 10 and 3? Is this the new Nokia Chicken/Cucco? 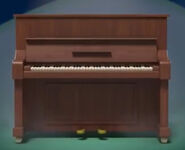 WHOSE IDEA WAS THIS!?

A pic of Ten changing shape in this episode.
Add a photo to this gallery

Retrieved from "https://numberblocks.fandom.com/wiki/Thirteen_(episode)?oldid=175194"
Community content is available under CC-BY-SA unless otherwise noted.