Thirteen, or 13, is a Numberblock made up of 13 blocks. He is voiced by Marcel McCalla.

He is a clumsy and unlucky Numberblock who is very prone to accidents and trouble.

Thirteen is made of 10 white blocks with red borders and 3 yellow blocks. He has maroon eyes, lips, eyebrows, and limbs.

Featured in his debut, Thirteen occasionally wears a boater hat. The ribbon matches the scheme of his block colors. He also wears a spotted bowtie in Fifteen's Minute of Fame, similarly resembling his block colors.

As a reference to the superstition, Thirteen is an incredibly unlucky Numberblock, commonly falling into accidents and splitting into Ten and Three upon hearing his name. Despite his accident-prone nature, Thirteen attempts to make light of his situation, commonly resorting to humor and turning his unfortunate problems into comedic, playful situations. He appears joyful and friendly, often admiring the talents of others and playfully joking around with his friends. Thirteen is also very sweet-natured, never responding with anger to mistreatment and instead focusing on helping others.

Despite typically laughing his unluckiness off, Thirteen is shown to be heavily impacted by the actions of others, often expressing sadness and disappointment when he is subjected to anger and frustration. He is also shown to be more anxious and fearful in more serious and problematic situations, often straying to the side rather than actively participating. Notably, he still also expresses stress and sadness when others say his name unnecessarily and is frequently shown worrying about his unluckiness. 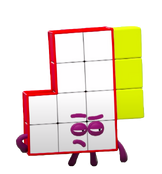 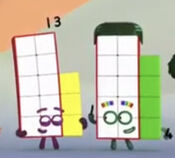 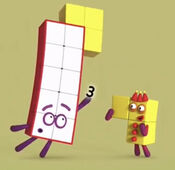 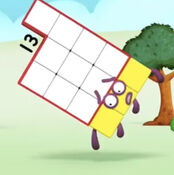