"The Way of the Rectangle WANTS TO MUNCH US, CRUNCH US, GOBBLE US UP!"

This page is not protected. Edit at your own risk.

The Way of the Rectangle

The Way of the Rectangle is an episode of Alphablocks.

Twelve shows the other Numberblocks how to arrange their blocks into columns and rows - and master the way of the rectangle.

Six and Eight see Twelve meditating at a palace named Rectangle Serenity (name not mentioned in episode). They come to her. Twelve greets them and allows them to watch and tell her if she's making a rectangle. When she arranges 3x4, Six and Eight display their factors and arrays; Six is 2x3 while Eight is 2x4.

They crash into a gong. Four comes by and asks them if she's okay. Next, Twelve teaches them how to turn like a rectangle. Four tries, but being a square, he thinks something is wrong. Twelve tells him that Four is a special kind of rectangle that is the same number of blocks wide as the number of blocks tall (2x2).

Four then crashes into Three and Two. He shows them his rectangle meditation, but Three says she can't make wide rectangle shapes. Twelve has another method: she asks everyone to stand vertical; they are a tall, thin rectangle. They all start to fly around. Twelve doesn't mind, so she joins in. 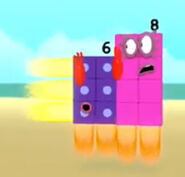 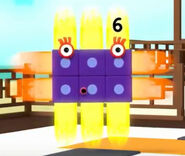 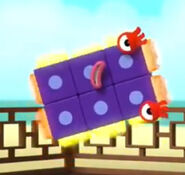 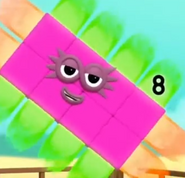 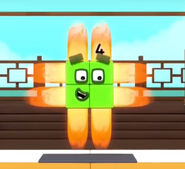 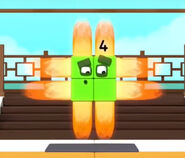 Squares are rectangles too!

“We all have RECTANGLE RAYS!”

“I am not a multiple of two numbers that are larger than one!”

It doesn’t matter if you’re prime or composite.

What does matter is the fact that any number has a factor of one!

Maybe I shouldn’t have told them...

COME FLY WITH US!
Add a photo to this gallery

Retrieved from "https://numberblocks.fandom.com/wiki/The_Way_of_the_Rectangle?oldid=160102"
Community content is available under CC-BY-SA unless otherwise noted.