Addition and subtraction by 2

The Two Tree is the 13th episode of Numberblocks Season 2. It is the 28th episode overall.

Nine is coming to see Ten and Ten is sitting under a tree with two baskets and they decide to play a game of Throwing Twos. Nine is on red and Ten is on blue. Nine draws a line (with his feet and making grass appear) to mark the start. Ten is bigger.

Two puffs up into a rugby ball.

Nine tries to grab Two but Eight is too fast for him. Eight tickles Nine's middle block causing him to sneeze it out. Now there are two Eights.

Eight throws Two through the other Eight's hole, then One goes into Eight's hole making him Nine again!

Seven throws Two and bounces to the red basket. (Eight has touch the ball once but not finish to the blue basket,he feels so angry.)

Six raps and rolls a dice on 6, Seven says he is lucky.Then Six throws Two to the blue basket. Two gives Six a penalty for making a distraction and moves to the red basket.

Five and Six switch their belongings: Five gets the dice and Six dunks Two onto the blue basket.

Four throws Two, but Five hits him to the red basket.

Three juggles Two, with Four assaulting the Two and dunking it.

Three throws the wrong Two to the red basket. The other Two shouts "penalty" and jumps to the blue basket.

Final round! One cannot pick up Two because she is one little block, but Two can help. They pick up Two together and throw him to the red basket.

It's a draw! Then Eight and Eight turn back into Nine and Ten. They'll play again tomorrow!

TWO, FOUR, SIX, EIGHT! WHO DO WE ABSOLUTELY HATE!? 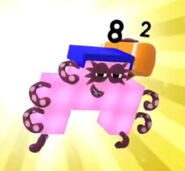