The Three Threes is the 25th episode of Numberblocks.

The episode begins with 4 flying his square kite with 9. But 4's kite gets stuck in a tree. 4 tries to pull the kite, but it doesn't work. 9 tries to grab the kite, but that doesn't work either. 9 tells 4 he should get 10, since she's the biggest Numberblock, but 4 says that they don't need her and tells 9 he's a "big square". 9 rearranges himself into a square and tries to run up the tree, but he trips and falls on the ground and sneezes into 8 and 1, the latter flying in the air and landing into 8's hole, becoming 9 again. 4 decides he should go and get 10 but doesn't work. 9 thinks there's another way for him to do this.

The Three Threes introduce themselves and use their trapeze act to get 4's kite out of the tree.

4 comes back with 10 who is carrying 10 Numberballoons. 4 says, "You did it, 9!" 9 notices he is carrying 4's kite, and says, "It is nothing really" and chuckles. Suddenly, all the Numberballoons except number 10, which remains in 10's hand, blow away. The other 9 balloons need to be saved by 9 himself.

The other Numberblocks return and 4 says, "You did it again!" 9 gives everyone their respective Numberballoons, chuckling.

1 asks if someone can open her jar of honey. 8 wants to help, but is interrupted by 9 who says he can do this by himself.

The first Three Three tries to shoot herself out of a cannon, the second 3 will fall of a high diving board and the third 3 will ride a bike at the jar. They all do that at once, but they accidentally crash into each other.

The Numberblocks 1-10 holding their own Numberballoons

What the plan, Nine?

"Stand aside, Eight. You can leave this to me."

Clean this mess up, The Three Threes! 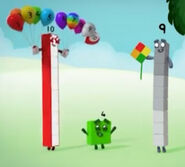 I got your kite back! Well, to be more precise, it’s a parallelogram. 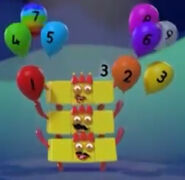 Three-stack.
Add a photo to this gallery

Retrieved from "https://numberblocks.fandom.com/wiki/The_Three_Threes?oldid=152236"
Community content is available under CC-BY-SA unless otherwise noted.