The Legend of Big Tum

The Legend of Big Tum

A monster with a big hairy tummy who loves puzzles? find out who is in Big Tum's tum.

The Numberblocks 1-10 are climbing up Blocky Mountain. Seven says they might see Big Tum, a big hairy monster with a big hairy tum who loves to solve puzzles. Then a cold wind blows. The scene fogs and Big Tum appears.

Eight asks is one of them is missing. The Numberblocks call out their number in order from 1 to 10. Four appears to be swallowed by Big Tum. Five asks is Four is okay. Four says it's all warm and snuggly in Big Tum's tum.

One and Nine visit an igloo and hears Big Tum's "yum yum!" Nine is changed into Three, who says she was Nine and Big Tum swallowed some of his blocks. She doesn't know how many were swallowed, so One draws Nine on the ice wall.

Who's missing? One grabs some ice blocks. She counts six as she puts each one on Three. It's Six who was swallowed by Big Tum. Big Tum spits out Six who adds with Three to make Nine.

Nine adds up Snowblocks 1-4 together. Ten counts the ten snowblocks altogether, so Ten is the swallowed Numberblock. She is spat out and separated into 1-4. Ten asks Big Tum if they can all come in until it stops snowing. All the Numberblocks are then swallowed by Big Tum. At the end, Big Tum eats and swallows the camera.

“A big hairy monster with a big tum who likes puzzles?” 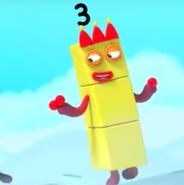 One made a snow block angel.

“And then Big Tum gobbled up some of my blocks!”

“And if the difference won't pop into your head, just count the missing blocks!”

Big Tum’s at it again.

“Nope. They’re all together now.”

Big Tum and the Numberblocks 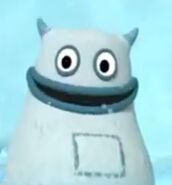 "And some more room for you too!"