Ten out of Ten

Ten out of Ten

The Numberland adventures continue all the way to ten in the second season of the accredited hit show.

Here are some of the new mathematics skills showcased in this season: 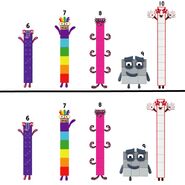