This page is about the character(s). For the episode, see Ten (episode).

Ten, or 10, is a Numberblock who debuts in the episode with the same name.

She is voiced by Teresa Gallagher.

10 is the biggest of the Numberblocks. She can turn herself into a rocket & fly into space.

10 is made of ten white blocks with a red border. She has star-shaped red eyes and pink lips. She has dark red limbs and wears two gloves in her block colors. Sometimes her 1-block outlines disappear, which makes her a 10-block.

Gabe Sotillo's original design of 10 is male and is gray with dark gray lips and limbs. His star-shaped eyes and gloves are light blue.

One and Ten in "Ten"

Ten ways to help your children at math

Ten at the end of "Ten Again" 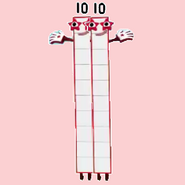 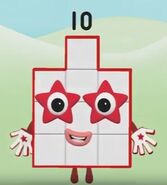 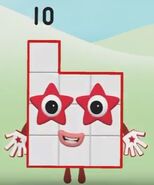 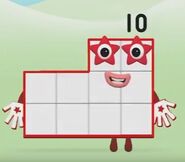 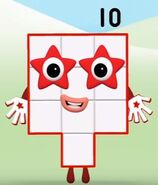 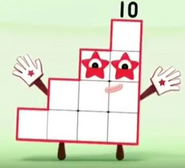 Ten with a 2x5 form but with no gloves

Numberblock ten in now we are six to ten

Numberblock ten in a bucket
Add a photo to this gallery

Retrieved from "https://numberblocks.fandom.com/wiki/Ten_(character)?oldid=174875"
Community content is available under CC-BY-SA unless otherwise noted.