Starting off the episode, T takes a stroll through Alphaland while humming a cheerful tune. Then Y follows T and asks him why he’s so happy. T’s about to tell him, but P interrupts him when she pops in with a pineapple that she was about to bring for T. Until she spots T, and immediately pops away, and pops back. Just then R comes (with a balloon) telling everyone if they’re ready for a certain event. But then T questions R, and she immediately stops talking while losing the balloon. Then A falls down with a party hat and questions if she was late for the surprise, which T questions. A quickly hides the hat. T, R, A, and P, then hold hands.

A was confused what a trap was until T, R, A, and P fall in a trap door. Y cheers that they found the trap. They now have to find a way to get out of the trap.

What can they do?

Once they reached to surface, Y cheers. He then tells T to close his eyes. Once he did that, the Alphablocks held hands.

Just then a party is made, along with O, D, and H who also appear. It turns out, they were all planning a Surprise Party for T, but it wasn’t just any party, it was a TEA Party. T is happy that he gets his very own party. 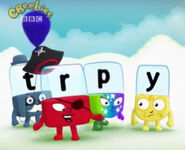 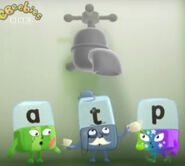 When T sees some art

Get it?
Alphablocks episodes
Community content is available under CC-BY-SA unless otherwise noted.
Advertisement