In Alphablocks episodes, if one looks closely, Alphablocks can be spelling out words in secret, due to positions, not actually spelling it.

Isn’t it weird that the “ch” is barely heard?

Too bad there is no party.

You could’ve done it, Alphablocks...

Replace that T with an S and you get a SUB!

At least you tried.

You will GET WET.

RUN AWAY FROM YOUR FEELINGS!!!

Please, don’t dump out the gold.

I wish things can go a LOT better. 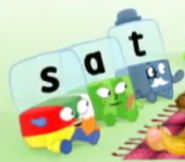 Just in time for the pick-a-nick!

Yes, this is a really stealth one, opposed to the others. If you didn't watch Alphablocks then you won't know why the blocks are arranged like this.
Add a photo to this gallery

Retrieved from "https://numberblocks.fandom.com/wiki/Stealth_Words?oldid=178122"
Community content is available under CC-BY-SA unless otherwise noted.