The Big One (compound)

Square on the Moon (figured-out)

Sixty-Four first appeared in The Big One as a compound Numberblock, then in More to Explore, Eight draws Sixty-Four on the grid in the square temple.

Sixty-Four has 60 light indigo blocks and 4 lime blocks with purple borders. On the back of her blocks, she has a black and white chessboard. She has square eyes for being a square, and thick eyebrows like Nine. Her eyes, mouth and eyebrows are blueish purple and her limbs are purple. Despite being a super-rectangle, she doesn't have an array display.

In Double Back, she was shown to be talkative. 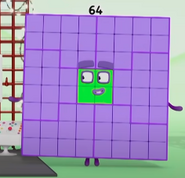 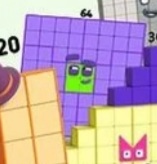 64 in the group shot