Sixteen, or 16, is a Numberblock made of 16 blocks. She is voiced by Beth Chalmers.

Sixteen is a party-loving square who particularly also enjoys comedy and games.

Sixteen is made of 10 white blocks and 6 indigo blocks. She has light purple square eyes and mouth. Her limbs are dark indigo. She often carries around an airhorn, reflecting the color of her blocks. The horn itself is colored indigo, while the bottom is red and white.

Sixteen has a team referred to as the "Four Fours", resembling a barbershop quartet. Each Four wears a boater hat with green stripes.

Sixteen is a very energetic and extroverted square, often partying and playing games with others. She is a natural comedian, often dropping puns and jokes, much to the entertainment (and sometimes exasperation) of her friends. Sixteen is both loud and brash, often using her airhorn to celebrate her status as a square. She also provides heavy emphasis on entertaining others, going above and beyond with her party tricks. She often splits into the Four Fours as a result.

Sixteen is also both incredibly friendly and amiable, being quick to entertain her peers and provide accommodations in Square Club. She also tends to resume a leadership position amongst the other squares, usually hosting parties herself while looking out for the interest of the others. She is also, however, shown to be reckless and dives into situations headfirst, and shows little to no fear or anxiety in even unnerving and dangerous situations.

As a square, Sixteen holds great passion for squares, and appears to hold mild disdain for round things. 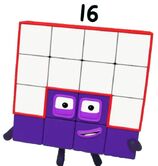 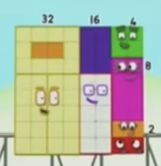 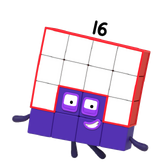 How did they not notice this error?