Seven or 7, is the Numberblock made up of 7 blocks. He first appears in the episode with the same name.

He is voiced by David Holt.

Seven has 7 blocks; each with the colors of the rainbow (with his head being violet, and his other blocks being the colors of the Numberblocks below him, One through Six), he once had violet coloring in his debut episode before the rainbow change his blocks to a rainbow, he also has 7 strings of multicolored hair, purple limbs, yellow rectangle-shaped eyes, and a long yellow mouth.

As a reference to the superstition, Seven is extremely lucky, being able to handle almost any situation with relative ease.

Seven is a joyous Numberblock and is proud of his luckiness. With his luck, he has no fear of any situation and can easily help his friends with it. 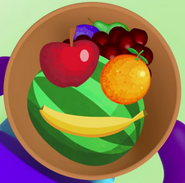 A fruit face in 7's hands

7 sleeping in "Now We Are Six To Ten"

Seven and Ten being surprised 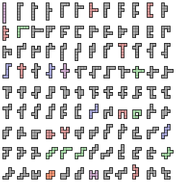 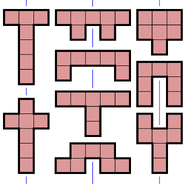 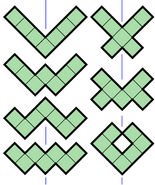