June 7, 2021
Season 8 is the eighth season of Numberblocks, and the second season to premiere in 2021. It is the latter half of Series 5.

Four on the Floor

Remember these from the schedule? Note how it said "5/30" meaning the fifth episode out of 30 episodes, confirming that Series 5 has 30 episodes, and that Season 8 exists. (If you check the schedule now, it won't say this anymore, now that all the Season 7 episodes are out.) 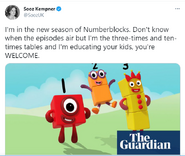 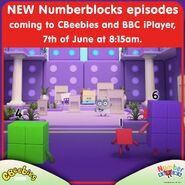 The default thumbnail used as a placeholder for Season 8 episodes before the real ones appeared.
Numberblocks episodes
Community content is available under CC-BY-SA unless otherwise noted.
Advertisement