S is the 19th letter in the Alphablock gang. She is the nineteenth letter of the alphabet, who speaks in a Scottish accent, like N.

S is voiced by Teresa Gallagher.

She is a multicoloured block consisting of colours red, green, white, orange, blue, and yellow. She resembles a beach ball.

Despite her bright and colourful looks and her rather kind heart, she can be prone to feeling sad, especially when she sags. She can fly by inflating or deflating herself and letting it go, blowing her about.

S can look like a beach ball because it’s a reference to the same object. 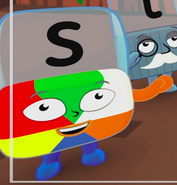 Capital S, as seen in Letters to Santa

Digraph SS, as seen in an episode of Alphablocks: Word Magic 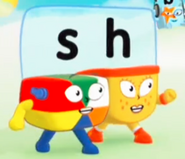