Ride the Rays is an episode of Numberblocks.

A fantastic treat awaits the numberblocks at the top of Ray Canyon.

Numberblocks 1-6 enter through the doorway to Ray Canyon. When they come out, they see something interesting. Six mentioned Twelve's words that if any of them can get to the top, they'll find a big surprise. But how? Simple, they’ll have to RIDE THE RAYS!

Three suggests they can't be stuck if they add up.

Six rides the 3-ray and meets with the other Six.

Twelve rides the 4-ray, before she separates into Six, Three, Two, and One.

As Twelve rides the 6-ray, she says "I'll drop you a line!" Three asks what that means. When Twelve reaches the top, a rumbling sound is heard. A red 1-ray appears for the Numberblocks to ride on to the Rays Track, where Numberblocks can roam on rays. 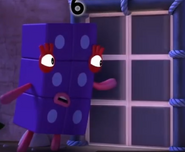 WHO KNOWS WHAT AWAITS YOU? 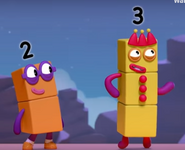 Sure, they could add up to 21, but that's way too far than we should be. Also not high enough.

Like Triforce Heroes, these ladders only allow specific rays to pass. 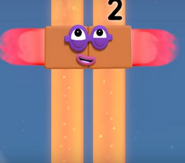 One thing to know about Three: she can't boast about being square enough. IT'S JUST NO USE!

Yes, Three's arm is being a stealthy ninja. 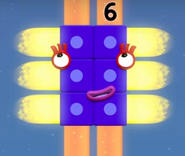 COME FREESTYLE WITH US!
Numberblocks episodes
Community content is available under CC-BY-SA unless otherwise noted.
Advertisement