R is the 18th letter in the Alphablock gang.

R is voiced by Teresa Gallagher In UK.

She is a red block wearing a black hat with a white skull-and-crossbone emblem with an eye-patch over her left eye, as is typical in popular depictions of pirates.

R is a swashbuckling tomboy. She's always saying "arrrr" and "walk the plank" like a stereotypical pirate.

As seen in Map, R only wears an eye-patch to be pirate like. She sees fine out of both eyes, but due to animation error, it could be misunderstood that this is due to a lazy eye.

R, without her pirate stuff 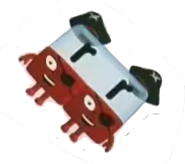 Digraph RR, as seen in a magazine