In this episode, Q needs U to make It quiet.

U is walking. Q appears out of nowhere and exclaims "Qooey!", but U runs away from her, and bumps into I and T.

Suddenly, the ground shakes. "**iet, did you hear that?" asks Q. U doesn't understand. Q merges with him and says, "I said /kw/, quiet! Did you hear that?" I thinks "It" is something big. U thinks it's unbelievably heavy. T thinks it's... tiny, just when they see a red It. Then It says U's sound. U asks it to stop. Q agrees and merges with U again. I and T leave and the other Alphablocks come.

Suddenly, It becomes a duck and starts to quack.

It becomes a parrot and starts to squawk.

It turns into a mouse and starts to squeak. When I and T come back, I finds It annoying. Then U gets Q to hold It, and tries a word without Q...

It doesn't work. U decides to merge with Q.

It goes back to its normal form and goes to sleep. 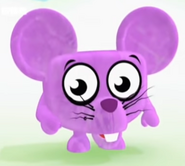 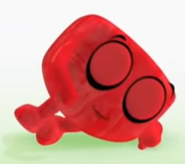 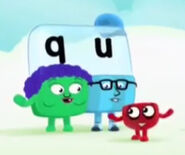 UIET!?
Add a photo to this gallery

Retrieved from "https://numberblocks.fandom.com/wiki/Quiet?oldid=178652"
Community content is available under CC-BY-SA unless otherwise noted.