"Quick WANTS TO MUNCH US, CRUNCH US, GOBBLE US UP!"

This page is NOT protected! Edit at your own risk!

This page contains a song that doesn’t have its lyrics, or the lyrics are incomplete.

Unknown
Quick is an episode of Series 2 of Alphablocks.

P, I, A, N and O bring in a piano. Q plays it, but wants U to play it with her. They play together singing their sound, but U wants to be alone, causing Q to decide to sing, but she sings "like a duck needs a **ack" instead of "quack" without U. Q stops U playing and says she needs U to say her sound. Q and U sing the Q words in the song together including the word they sound out...

Every time that happens, a duck appears. Z announces it's time for the Alphablocks...

Question 1: What do you call a crate of ducks?

A box a quackers!

Q sings the next verse of the song, and then...

Q sings the song again in a fast tempo. It's time for another...

Question 2: What does a duck with the hiccups sound like?

Q sings the next verse of the song, and then...

Q sings the song again in a faster tempo.

Question 3: What time does a duck wake up?

At the quack of dawn!

Q sings the next verse of the song, but U decides to...

Everyone faints as the song ends.

A person who has amazing yet insane moments during a time that is supposed to be focused or serious.

This person usually has a buddy or two who create the mayhem or do idiotic things that make it all just fantastic. 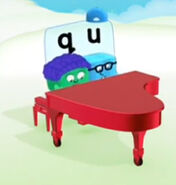 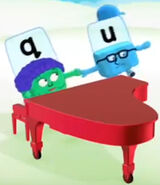 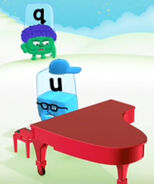 Q is angry that she can't sing without U. 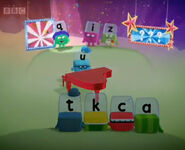 Time for a quiz!

“I’m quivering, quaking, feelin’ queasy, even if the questions are quite easy. I’m so quiet. Without you near me, no-one can ever hear me.” 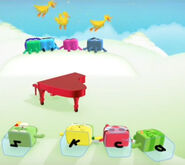 QUIT!
Add a photo to this gallery

Retrieved from "https://numberblocks.fandom.com/wiki/Quick?oldid=177805"
Community content is available under CC-BY-SA unless otherwise noted.