Plusman is the fourth Season 4 episode of Alphablocks.

Plusman to the rescue! A new superhero arrives in Alphaland to save the day by joining words together.

X is seen sleeping when he is suddenly awakened by his alarm. He uses his X-ray vision and flies up, but accidentally hits the ceiling so hard that his X gets tilted and turns into a plus symbol, and X turns into his alter-ego Plusman! Plusman then flies through the exit and meets R, who is on a treasure hunt and finding something with five points and lives underwater. Plusman helps and brings in three Alphablocks.

A star appears, but it's not what R is really looking for. She says it also lives underwater. Plusman helps and brings in three other Alphablocks.

A fish appears. R says she really needs something that has five points and lives underwater. Plusman combines Star and Fish together.

A starfish appears, which is what R is looking for. R thanks Plusman for help, and Plusman flies off. Meanwhile, D, O, and G are admiring a helpless dog, while SH, EE, and P are chasing sheep, until Plusman combines Sheep and Dog together.

A sheepdog appears to make the sheep do wonderful tricks. The sheepdog rounded up the sheep. Then, Plusman flies off to L, U, N, and CH, who are having lunch and are trying to find what they should carry it in. While thinking of something, Plusman slips on a banana peel and turns back into X. X still has to help, so he brings in two other Alphablocks.

A box appears, but it's only a medical box. However it does has a plus sign on it. X thinks Plusman is a silly name as he is unaware he was Plusman, but maybe he would try to make compound words. X writes an x and rotates it to make a plus sign. Lunch and Box are combined together.

A lunchbox appears and stuffs in all the food. B asks X for a banana, but X shakes his head. 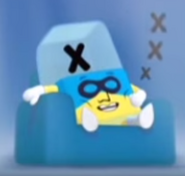 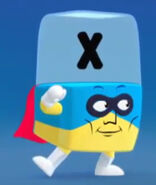 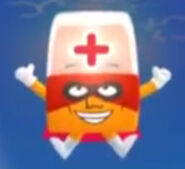 "But this box is full of bandages."