He is circular with four quadrant-circular blocks. He has eyebrows of 3.15 blocks that are dark green. His blocks are a pale chartreuse-yellow colour and his limbs and lips are dark green. He has one bucktooth.

Arif Khamis-Yussuf - Arifmetix's design of Pi looks like Four, but is circular and has eyebrows of 3.15 blocks. He has four quadrant-circular blocks because 3.14 is near to 4.

Gabe Sotillo - Punchcar63's design of Pi is similar to Arifmetix's, but is blue, red, green and yellow. He has lavender lips and only two top teeth, while the bottom teeth are all present. 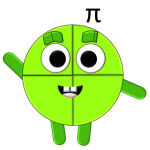 ThePinkDrop’s Pi
Add a photo to this gallery

Retrieved from "https://numberblocks.fandom.com/wiki/Pi?oldid=98641"
Community content is available under CC-BY-SA unless otherwise noted.