"I don’t think I’ve seen One Hundred (character) before!"

This page is about the character. For the episode, see One Hundred (episode).

One Hundred (100) is a square Numberblock. She is voiced by Sharon D. Clarke.

SuperToysUniverse’s design of One Hundred is golden, used making Clay.

Stikbot1992's design is white on the inside, two outlines, one red and one white, with ten stars a glove.

SuperToysUniverse’s 2nd design of 100 is red and white checkered.

ThePinkDrop’s design has two red borders, and the blocks are all white.

ISNorden's design of One Hundred is golden with crimson limbs; each of her blocks is edged with the same crimson shade. She wears white gloves (each one with a bright-red star accent) like those of Ten, and white running shoes with bright-red racing stripes (four per foot). A pair of sunglasses with golden, star-shaped frames hides this One Hundred's eyes; presumably, her eyes are square (but no other Numberblock knows for sure).

ISNorden's One Hundred (as drawn by Lewis06)

Ditto except with humanized one hugging her and crying

100 Sleeping In One Thousand And One 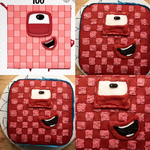 One Hundred cake
Add a photo to this gallery

Retrieved from "https://numberblocks.fandom.com/wiki/One_Hundred_(character)?oldid=118550"
Community content is available under CC-BY-SA unless otherwise noted.