Numberblocks Wiki
Register
Don't have an account?
Sign In
Advertisement
in: Alphablocks Episodes, Episodes with songs, Everyone is Here!,
and 2 more

On is the 24th episode of Alphablocks Series 2.

A huge (but inactive) screen fills the background. O and N spell "ON", causing a switch to appear. O turns the switch on, and the screen displays a bright white background before the switch mechanically ascends out of sight. O and N leave together, allowing the show to start.

A falls down as the screen changes graphics. The apple falls down as her letter sound started. As more apples fall down, it makes a beat of a rhythm.

As the rhythm continues, B, C and D descend on a stage panel. B makes her letter sound with her bass while C makes cracks and D plays his drums.

A joins the band while juggling the apples.

Before the band continues singing, the stage platform breaks along the cracks C has made and slides to the floor. This leads up to the next act.

F flies around making her letter sound as well.

G comes around with a glass of water glugging to make her letter sound too.

And finally they pose together to end their act.

The next one starts with I with her Viking helmet and wig, then starts singing with her letter sound.

J hovers suspended from a wire (making her appear to fly) as she interrupts I's spotlight with her letter sound.

I feels angry about J's performance, but begins singing again while J continues dancing, J then lands on I, leaving the spotlight a mess.

K comes kicking his football while saying his letter sound.

L comes to join K but she sings her signature lullaby song.

This next act starts with M tearing the screen apart and eating with his letter sound.

N rebukes M with his own letter sound.

The two Alphablocks fight until N angrily drags the confused M offstage; M still holds the screen corner that he had broken off to eat.

O arrives, wearing his hip-hop attire. He raps with his letter sound.

P pops along with her letter sound to join O.

Q enters, trying (but failing) to add a one-letter sound to the act. She realizes her problem and grabs U to make QU; O and P are impressed for Q and U's compounded letter sound.

Act 7: Over the Seas

R appears as she is about to dance with her letter sound.

While S sags up, R dances around S to sag around to offscreen.

This next act starts with a techno-themed vibe as T comes in with his letter sound.

As T steps over to the DJ mixer, U enters.

U then dodges the laser lights as V vrooms in with his letter sound.

Both T and V leave; U is the only one feeling worried about his unfair abandonment.

The grand finale recaps all Alphablocks' making their letter sounds in order, mostly one at a time. (Q, of course, gets help from U again...)

When everyone else has cleared the stage, O and FF return to make the word, "OFF". The switch that had appeared at the beginning reappears; O switches off the screen, ending the episode.

WHAT WERE YOU THINKING, M!?

N tells M to stop eating pretty much everything

Now this is a story all about how my Letterling got turned upside-down! 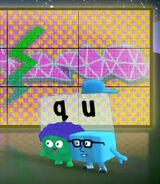 Act 7: Over the Seas