Odd is the 10th episode of Alphablocks Series 3.

O sees D drumming. He doubles up and sticks together to make digraph DD.

O's magnifying glass enlarges. O enters through the glass and finds himself in an odd world. He sees G growing an odd plant.

An og appears. It admires O's magnifying glass and steals it and runs up an odd tree. He calls Y for help.

A yog appears. The yog can't help by itself, so it needs a zog. O calls Z for help.

A zog appears. The yog jumps on top of it. Both the yog and the zog need a zox. O calls X for help.

A zox appears, coming under the yog on the zog. All three need a vox. O calls V for help.

A box appears, and inside is a large vox wearing socks (or sox). Soon there's a tower of odd creatures. The og returns the magnifying glass to O. O exits the odd world and back into Alphaland. He explains the whole thing to DD.

Short for Original Gangster. Also short for Oganesson, the 118th and currently the heaviest element in the Periodic Table. 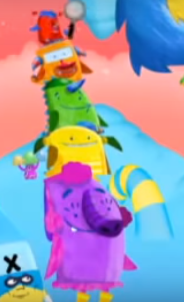 Depicted as a red thing with blue hair. It also wears a hat. It has flipper-like things, and antennae, which their ends look like flower petals. It has smalL eyes, and long nose.

Apparently a word in a different language. Also an acronym, like Og.

Depicted as an orange thing which has horns and flipper-like things, like the og. It has natural goggles in its eyes and has a bony tail.

Depicted as a green thing with a blue horn and is dino-like. The odd creature has scales on its back, has flipper-like things and stout legs.

A weird yellow thing. Its sears look like bolts and has flipper-like things. It has a striped belly.

However, there's no official meaning to this sword.

Vocals; voice. Could also be short for Voxel. Also a company that makes musical instruments and amplifiers, and also a YouTube channel.

Depicted as a purple thingy with hair and yellow socks (sox), and standing on a box. It has long gears and extra hair that looks like headphones. Has eyebrows and eyelashes, and a tooth is visible if its mouth is closed. It has long nose, like the og, and hair that is similar to public hair on its waist.

The box is small, has blue stripes. Probably the vox hiding inside it squeezes itself when it is in the box. Similar in color with the Alphablock U, but lighter.