Series 2 (commonly known as Season 3 and 4) is the second series of Numberblocks. The series would be scheduled to be released on September 17, 2018 on the CBeebies TV channel.

On November 25, 2017, CBeebies announced about the upcoming season. 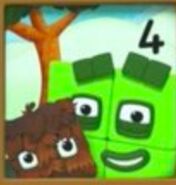 Season 4
Add a photo to this gallery

Retrieved from "https://numberblocks.fandom.com/wiki/Numberblocks_Series_2?oldid=137309"
Community content is available under CC-BY-SA unless otherwise noted.