This page is considered as a stub. If more info is added, this template will be removed.

Now You See Us

The Numberblock Castle is a castle located in Numberland. It first appeared in the episode with the same name.

It has puzzles required to complete to proceed into the castle (starting from the gate).

The exterior is light-yellow and dark-yellow, it has four towers. It also has a wooden drawbridge surrounded by a river and a five-block tall podium with a lever on top to open the drawbridge, It has four windows that are two-blocks tall; two on both sides, one on each tower.

The front of the castle. 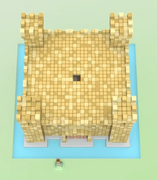 The top of the castle.

The first room has a vertical yellow-striped wall and red bricks on the bottom. There are pictures with gold frames of Numberblock One to Six wearing crowns with points of how many blocks they are. It has a grey square-patterned floor.