Cube numbers 8 and 27 and (briefly) other 3D shapes

Now in 3D is the first episode of Season 8 of Numberblocks. This is the 106th episode in the series overall.

The Terrible Twos have built a new machine called the Dimension-ator, allowing Octonaughty to enter a cube form and assume new heights of power. Using these newfound powers, he easily spins out other Numberblocks into 3D shapes, leaving them trapped and not able to rearrange. Octoblock attempts to stop him, but he two falls victim to Octonaughty.

Now imprisoned by Octonaughty, he can't rearrange and is trapped in a 3D shape. He attempts to use the Octo-Signal to get help, but Octonaughty covers his up with his own. Regardless, Twenty-Seven sees it. Not knowing what the signal is really, she assumes that someone needs a cube.

Having located Octonaughty's hideout, she is quickly disassembled by him when he throws her onto the controls, as Octonaughty kicks the remainders of her out and blocks the entrance with two more doors. In a sudden twist of events, Twenty-Seven reassembles as a "Super Cube", and now has a “Cube mask” and breaks into Octonaughty's hideout again as three Nines. They all proceed to break the Dimension-ator by sneezing at it. With Eight now freed, he becomes two Fours, as Twenty-Seven becomes the Three Three Threes (nine Threes in total) to trap Octonaughty. He easily escapes and attempts to become a cube again. Much to his misfortune, he ends up becoming flat, and is sent over the horizon from an explosion.

This episode's learning objective is to learn about cubes, and other ways of arranging blocks in three dimensions. 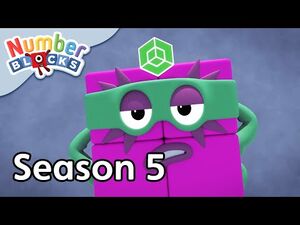