Unknown
In this episode, N, O, T, and E make music, and S makes more, and more of it.

S sits on a hill and sees Magic E walking by. S follows him. T ask N and O if they want tea but no one wants some. They and Magic E hold hands.

A note appears in the sky and S wonders what is it. T says it's a note. E says it makes music. O touches the note and makes a sound.

Ten notes appear, and T counts them. The notes make nice music while they all skip.

Many more notes appear. All the notes play Flight of The Bumblebee and they all hate the noise. T tells S to make it stop.

A net appears from nowhere in O's hand. O catches the notes.

More nets appear and they all catch the notes.

At night, they all get tired. L then appears on screen and likes the music.

They make more notes and the sky and notes change appearance. L, E, O and N start to dance. S tells them to stop. T says it's tea time.

All the notes except one disappear.

Short for transnational education. Also stands for The Numberblocks Express. 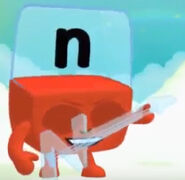 THERE ARE TEN, TEN, TEN AGAIN!

“S, you could make everything plural!”

ONE!
Alphablocks episodes
Community content is available under CC-BY-SA unless otherwise noted.
Advertisement