This page is about the character(s). For the episode, see Nineteen (episode).

She has white with red borders with 9 gray blocks that have 3 shades of grey.

She's one off feeling like the odd one out. She likes to make crazy shapes for one thing such as fishing. She could be utilized in many ways like in her episode. She likes suggestions for crazy shapes from other numberblocks. and seems to be able to utilize a pencil to draw on her.

Gabe Sotillo's original design of Nineteen is dark blue with green eyes, lips, and limbs. Additionally, That design is male.

TSRITW's design of Nineteen is yellow with triangular eyes.

Arifmetix's design of Nineteen is brown with purple oval eyes and a viking helmet with braids. She always hiccups while singing opera, making her 18+1 again.

ALARM BOB OMB's design of Nineteen is white with different types of blocks.

Gavin's design of Nineteen is male and has blue limbs. He has rectangular eyes.

Foldy336 Spongebob909's design of Nineteen is male and has purple limbs, and upside down L eyes.

19 utilizing a pencil to draw on her. 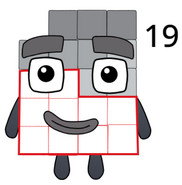 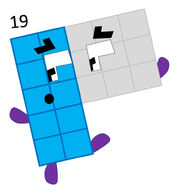 Rayman901's Nineteen
Add a photo to this gallery

Retrieved from "https://numberblocks.fandom.com/wiki/Nineteen_(character)?oldid=174446"
Community content is available under CC-BY-SA unless otherwise noted.