The Twelve Days of Christmas

Nine, or 9, is a Numberblock who debuts in the episode with the same name.

He is voiced by David Holt.

Like 4, he likes to be a square, and is generally a nice guy who's also stronger than 4. It is unknown if 9 actually fears round things.

His most notable trait, however is that whenever he sneezes, he launches out his middle block and becomes 8. This is apparently because he has a "tickly nose". How hard he launches it has varying degrees of strength; on one hand, it is not shot very far away, while on the other, it is shot hard enough to push buttons, knock down others, and even break machinery. It is even demonstrated that he can also sneeze into three 3's, propelling them in the process. Usually, the 1 runs back into 8's hole to recreate 9, though in one case it ran away from him.

In the rare occasions, it's shown that he may feel like splitting into three 3's all of the sudden. This group is known as the Three Threes, who tend to not have very good coordination with others, even themselves. For example, they explicitly shrug off the Four Fours' request for them to help, and they try and open 1's honey jar in their own ways.

9 is the Numberblock made up of 9 blocks, each 3 in a different shade of grey. He has darker grey eyebrows with a small tint of blue. The eyes, lips, and limbs are completely grey. He has the same face as 4, except his eyebrows are solid curved rectangles.

9 splits into The Three Threes. 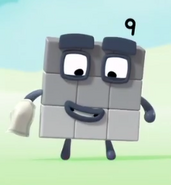 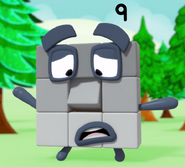 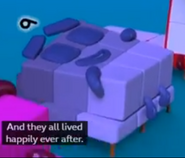 9 sleeping in "Now We Are Six To Ten"

Nine drops a biscuit in his milk In "Fifteen"

Picture of 1-10 in "Heroes With Zeroes"
Numberblocks characters
Community content is available under CC-BY-SA unless otherwise noted.
Advertisement