Mirror, Mirror is an episode of Numberblocks.

One makes a wish that the magic mirror could make lots of friends at once, and pretty soon it's pandemonium.

In Numberblock Castle, Numberblocks 1-10 walk to a long gallery. One peeks through a downward stairwell. She walks down and finds a mirror. It makes two Ones, who both add up to Two. Two decides they should make Three next. One tells the mirror her wish to make three Ones. The mirror becomes three and three Ones appear.

One wants to tell the others about it, and warns Two, Three, and Four to keep an eye on the mirror and not mess around with it. Three does it anyway and asks the mirror for two lots.

Next, Three asks the mirror for three lots.

Nine separates into the Three Threes. Three checks to make sure everyone's here, but Five is missing. Three wonders how many lots of which number is 5. Three puts Two at the magic mirror and asks for three lots.

Another Six appears, but Three says she's hoping for Five. Four tries the mirror and asks for two lots.

Three says they're also missing Seven and Ten and asks who wants to try next. Back upstairs, One leads the group to the basement. Back downstairs, five Twos appear.

All they need now is Five and Seven, but Two hears footsteps. He barricades the door and tries to get the others to hide. Two sees a closet door.

The basement door opens. The group sees nothing but a magic mirror, until an avalanche of Numberblocks tumble out of the closet, much to their... surprise!

One and one and one is three! We don’t like King Dedede!

NUMBERS! SO MANY NUMBERS!

Two and two and two is six! Hit him with a ton of bricks!

A really long One...

Did she say that she’s gonna show them “the long gallery”?

MAKING FRIENDS IS FUN, ESPECIALLY IF YOU CAN COMBINE THEM!

“Mirror, mirror (Roll credits!), hear my plea: I wish you could make three lots of me.” 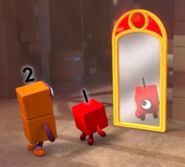 “Your wish is my command!” 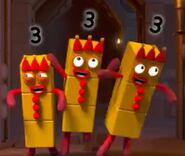 Let’s learn about the commutative property of multiplication. 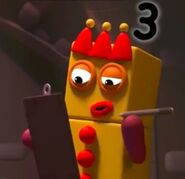 “A magic mirror!? What big surprise!”

The clones are inside!

8 must be spying on you

THIER LEGS STRETCH (wait.. didn't I post that is the comments?)

This video is unavailable.