Alphablock I is having a dance party - by herself! Can her friends help her see the light on disco night?

They're IGH, and you're gonna see the...

Stay right here 'cause tonight is the party...

I sticks with E like a clown with a trick bow...

Cross her heart, they never tell a...

I tells some lies. But everyone...

She's staying alive, she will survive, and together they'll be...

I says she feels fine. She tells everyone that she can share her name. Yes they can be her friends. No word of a lie friends. And with them by her side, they're gonna by flying high! 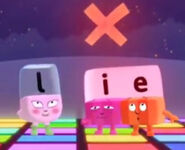